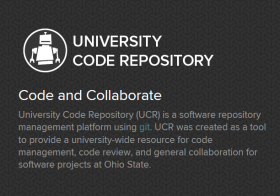 This article originally appeared in OnCampus on June 12, 2014.

Its name elicits the idea that something valuable is being kept there, and one day soon the creators hope that will be true from a financial perspective. In the meantime, the University Code Repository has become an exceptional collaboration tool for software developers across campus.

The UCR is not reinventing the technology wheel. Instead, it takes a sharing site popular among the developer community, GitHub, and creates a similar OSU-centric platform. With GitHub, all the source code shared on the site is open for anyone to obtain or manipulate — a valuable tool when a developer wants feedback from peers around the world. But such a public space might not always be the best place for code that is proprietary to Ohio State, especially code that might have the opportunity to become a revenue stream for the university.

Ohio State could have purchased its own GitHub site for tens of thousands of dollars, but some enterprising developers in the Office of the Chief Information Officer, the College of Arts and Sciences Technology Services, University Communications and the Technology Commercialization Office decided they could create the UCR and avoid the expense.

“We have more than 600 programmers on campus, so just having a better insight into what everyone is doing is a bonus,” said Paul Cook, a software developer at the TCO and a UCR team leader.