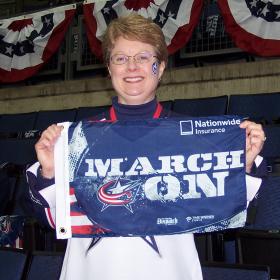 For April, the spotlight falls on OCIO veteran and organizer extraordinaire, Lisa Calcara. This Project Assistant has been with the OCIO for over 25 years and got her start at the university as a student employee in UNITS. Lisa loves coaching her own student employees as well as rooting on her favorite Ohio sports team, the Columbus Blue Jackets. Learn more about this dog mom and art enthusiast in this month’s Employee Spotlight.

Q: What is your role at the OCIO? I am a Project Assistant for the Telecommunication and Networking groups, part of the Infrastructure Team. I assist the Networking and Telecommunication and Facilities Directors, as well as the related service owners, by performing service and business process analysis; developing technical documents, customer notices, support materials, and other communications in relation to service changes and projects; providing administrative support for the directors and projects; and organizing events and conferences as needed. I also manage the TNC front desk responsibilities, including the student staff, and am currently the building coordinator.

Q: How long have you worked at the OCIO? This August, I will have 27 years of full-time employment with the OCIO and Ohio State. However, I started as a student employee 31 years ago with the university’s Telephone Services/UNITS department, which later merged with OIT, and then became part of the OCIO.

Q: Have you worked on any large projects since you’ve been here? I have worked on lots of large projects and service rollouts over the years with the OCIO. Currently, I am on the Neutral Host Wireless Distribution System (WDS) Project that is rolling out enhanced cellular services for the Columbus campus, including Ohio Stadium and the Medical Center.

In my earlier years with the organization, the two largest projects I was involved with were the telephone system and cable TV implementations. These projects built the university’s own telephone switch and cable TV head-end and then rolled out the related services to the entire campus, including the residence halls and Medical Center.

Q: What are you currently working on? What does a typical day look like for you? Each month, I review problem HDI surveys, breached SLA requests and incidents for the telecommunication and networking services and generate analysis reports for the service owners. The goal is to identify service and process issues and recommend changes that will ultimately benefit our customers. As part of the ongoing Neutral Host WDS Project, I provide documentation for the Medical Center status meetings.

I also provide ongoing support for telecommunication, networking and facilities projects and services. This involves a variety of tasks that can change frequently, such as:

Q: What do you like best about your job? I like working with people, especially the student staff. I really enjoy coaching the students, and I believe the skills and information they gain from their employment experience are just as important as the knowledge gleaned from the classroom.

Q: Did you always know this is what you wanted to do as a career? When I was younger, I always wanted to be an Olympic athlete, or at least work in some way with the Olympics – Summer or Winter – I loved watching both and still do. I also thought I might do something with the arts. I loved art class in school and had some artistic ability. Later in life, I turned my passion for the arts into being a volunteer on the Columbus Arts Festival Planning Committee for three years, organizing the children’s activities area and the event’s volunteers. Who knows, maybe I will have an opportunity to work or volunteer with the Olympic games in the future.

Q: Where have you worked before this? Right out of high school and through my first year of college, I worked for Lazarus department store on the north end of Columbus. The summer after completing my first year at Ohio State, I accepted a student position with Ohio State’s Telephone Services department in the billing area. It was supposed to be a part-time summer position only, but it quickly turned into a full-time job because of the university’s telephone system implementation that was just beginning. I continued working with Telephone Services, which was renamed as UNITS, for the remainder of my college time and then was hired on in the department’s Customer Service area after I graduated.

Q: What was your very first job? My first job (during my youth) was delivering the daily Mt. Vernon newspaper in my hometown with my two younger sisters. During the same time, we also mowed about 11 lawns each summer.

Q: Where did you go to college? The Ohio State University.

Q: Where are you from originally? I grew up in Centerburg, OH, the geographical center of the state.

Q: Do you have any family? I have a husband, Michael, whom I met through a former co-worker and the office softball team, and an 11-year-old dog named Tyler.

Q: Do you have any hobbies? I like reading mystery/suspense novels. I enjoy the arts and love going to plays and Shadowbox Live, as well as attending local festivals such as the Columbus Arts Festival, and the Italian and Irish Festivals.

My biggest passion, however, is probably sports, especially hockey. My favorite teams are the Columbus Blue Jackets, the Buckeyes and the Cincinnati Reds. I grew up going to Reds baseball games during Big Red Machine era, and growing up in Ohio, I have always been a Buckeye fan. However, hockey by far, is my favorite sport and the Blue Jackets are my favorite team. My husband and I have been going to CBJ games from the very first season. We have even attended a few away games in Florida, and hope to attend more games in other cities in the years to come. My favorite CBJ experiences to date are attending the team’s first ever playoff games against the Red Wings in 2009, attending last season’s playoffs and watching the team win its first ever playoff games against the Penguins and attending this year’s NHL All Star event here in Columbus. My favorite CBJ memorabilia is a team-signed hockey stick I won in a contest a few years ago.

Q: What is something most people might be surprised to know about you? I have some artistic and creative abilities. I loved to draw when I was younger and thought about majoring in an art-related field. However, I moved in a different direction with my career in college, but decided to take some art courses as well, including one in which I had to sketch a nude model for a few days!

Q: Favorite place to eat in Columbus? Tough question, there are so many places to choose from! Probably Pizza House on the north end of Columbus.

Q: Best concert you’ve ever been to? The Foofighters at the Schott several years ago.

Q: Favorite quote? "You can never pay back, so you should always try to pay forward.” Woody Hayes

Q: Do you have a favorite book or movie? My favorite author is Dan Brown. I love all of his books.

Q: It’s 9 p.m. on a Saturday. What are you doing? If it’s hockey season, I’m probably at a Blue Jackets game in Nationwide Arena or watching it at home. Otherwise, I am probably watching sports, playing Scrabble or another board game or dining out with my husband.