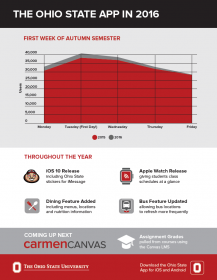 The Ohio State App lets you put campus in your pocket, so you can navigate the university on the go. Students, faculty and staff can find dining locations, check class schedules, review grades, look up email addresses, follow CABS bus routes and so much more.

The 2016 calendar year has been a busy one for the mobile app team—several major updates were pushed to the iOS and Android app stores, and the first week of classes brought more usage than ever before!

The mobile team completed the following major improvements in 2016:

In addition, the start of autumn semester 2016 saw more daily users than the start of autumn 2015. For example, on Tuesday, August 23, the Ohio State App was accessed by over 40,000 users, roughly a 6% increase from the first day of classes in 2015.

So what’s next for the Ohio State App? The mobile team is working to sync Carmen (Canvas) grades with the app interface so students can see individual assignment grades—not just final course grades. There are also features specifically for faculty and staff that are slated for 2017. Thanks to user feedback, the Ohio State App is constantly improving to better meet the needs of students, faculty and staff.