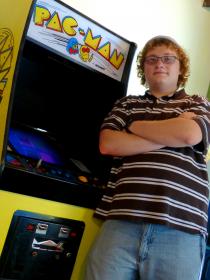 This month the spotlight falls on newbie systems developer, Cole Toler. With dreams of a tech career starting at a young age, Cole graduated from DeVry and gained the experience needed to get his coding career off to a solid start in the OCIO. Read on to find out what this developer does during his downtime.

Q: What is your role at the OCIO? I am a systems developer for the local apps team. I take part in developing new university software as well as maintain existing applications that keep work flowing throughout the university.

Q: How long have you worked at the OCIO? I’m still fairly new to OCIO. I started in September of last year.

Q: Have you worked on any large projects since you’ve been here? I’ve primarily worked on two projects since I’ve joined the OCIO. One of those projects was an application to manage billing services for Mail Services, and the other involves working on updates to the Netlink II system that manages architectural data for the university.

Q: What does a typical day look like for you? My typical day includes upgrading older reports to the new ActiveReports version, making changes to a screen or maybe working on some code in a stored procedure on some type of business logic in a project. Also, can’t forget the occasional help call.

Q: Did you always know this is what you wanted to do as a career? I knew from the point I was in middle school that I would want to go into some type of computer technology career. I think the thing that really started getting me into development was reading about small individuals making small scale games in an Electronics Magazine at the time. It sort of inspired me to start learning to code by bringing me toward Gamemaker and other beginner tools.

Q: Where have you worked before this? During my IT career I have had two other jobs. The first one was a short term temporary position that had me replacing PCs inside the OSU Med Center. The company name was Sophisticated Systems Inc. The second position got me the experience I needed to move forward in my development career by allowing me to improve my skills greatly in .NET. This company was Accellos Inc.

Q: Where did you go to college? I started college at DeVry University in 2009 and graduated with a CIS degree in 2012.

Q: Where are you from originally? I’m originally from the Ohio Valley, living in Wheeling, West Virginia for a few years and eventually moving to Glen Easton until age 17. That’s when I moved to Columbus for school.

Q: Do you have any hobbies? I have a couple of hobbies that I do often. The biggest one is retro video game collecting. For that I go around to local game shops, thrift stores, flea markets, etc looking for any gems. There is quite the community for this hobby in Columbus as well, and I attend Corgs-Con every year (an event for the Columbus Ohio Retro Gaming Society). Another hobby of mine is gardening; I find it calming and fairly simple to get my mind off things.

Q: What is something most people might be surprised to know about you? I’d say it’s my game hobby. It’s a fairly big part of my life that I don’t normally bring up to people I meet.

Q: Best concert you’ve ever been to? Reel Big Fish concert that I saw last year

Q: It’s 9 p.m. on a Saturday. What are you doing? Playing some sort of PC game, listing to music or out with friends either at a restaurant or somewhere else

Special thanks to Ethyl and Tank for letting us take over their arcade!