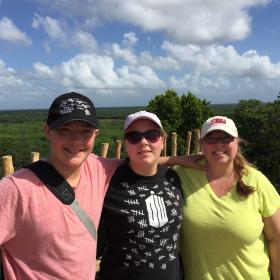 This month, the spotlight falls on OCIO employee Julie Wuebker. This Application and Operations Manager for BuckeyeLearn is loving being a part of the university, especially having the opportunity to help her fellow Buckeyes grow professionally. Julie has worked with wrestlers, trainers, pun writers and theatre folk, yet the OCIO is still challenging enough for her passions. If you happen to run into her at ADC, ask about her superhero children and mad Rock Band skillz. Learn more about Julie in this month’s employee spotlight.

Q: What is your role at the OCIO? Application and Operations Manager for BuckeyeLearn

Q: How long have you worked at the OCIO? I’ve been here just over a year. I joined OCIO in April 2015.

Q: Have you worked on any large projects since you’ve been here? I have been working on rolling out BuckeyeLearn to the university, and just completed the roll out to the Medical Center in April. These projects facilitate the management, reporting and tracking of training. I like being a part of something that helps employees further their professional development.

Q: What does a typical day look like for you? Our team is working on implementations with several units on campus such as A&P and EHE. Traveling to meet with units is very common. I feel like I got a crash course on how to find my way around campus!

Q: What do you like best about your job? I have a great team! I get to work with units all over campus, and each unit has diverse business and technical needs, so I am always challenged. I’m relatively new to the university, but I have been very impressed by the dedication of those we get to work with and support.  It’s great to be a part of a larger university community, focused on a valuable mission.

Q: Did you always know this is what you wanted to do as a career? Not exactly. My degree is in Audio Engineering and Sound Design. I still do it for theatrical productions a few times a year. My husband and I work on projects together through his business. We will be starting a project for a new sound and lighting design in the tunnel at the Detroit Airport. So, even though it’s not my primary job, I still get to use my skills and do some creative work.

Q: Where have you worked before this? I was at Franklin University for 10 years. That was a long time, and in many ways it was like leaving family. However, I needed a new challenge, and coming to Ohio State was most certainly a great opportunity. I also worked at a training company called MindLeaders (now SkillSoft), and before that, a greeting card company called Why Not Creations.

Q: What was your very first job? I was an audio engineer (A2) at Disney i.d.e.a.s. which was located at MGM Studios, Walt Disney World Studios Florida. It was an amazing experience. I got to work on projects like Mulan, Tarzan (the terrible TV show), and WCW (which later became WWE). I ate lunch with wrestlers like Jeff Jarret for a couple months during shooting on the sound stage. I also shared a bathroom with Oprah once too. That was interesting.

Q: If you could travel anywhere in the world, where would you go and why? I would to go to Machu Picchu, Peru. I find the history of the Maya and Inca of Central and South America to be fascinating. I studied Mesoamerican history in college and have been hooked ever since.

Q: Can you tell us about your family? I have two children who are growing up way too fast. Emma, 17 and Brandon, 14. I also have a dog, Buster. He’s a scrappy 14 lb. terrier who thinks he’s 140 lbs. My husband and I have known each other since we were in middle school. At this point, we’ve known each other longer than we haven’t known each other.

Q: Do you have any hobbies? I spend my limited free time doing Scouting with the family. I am an advisor for my daughter’s Venturing Crew and I go on campouts with my son’s Scout troop. I earned my Polar Bear award this spring. I had the (mis)fortune of tent camping that weekend in April when it snowed and was in the 20s.

My kids like to cosplay, so I build costumes and accessories for them. I’m not an expert, but it is fun and it’s a great creative outlet.

Q: What is something most people might be surprised to know about you? I’m a trained singer, though I don’t do it publically very much anymore. Lately I have just been playing Rock Band to keep my chops up. I’m ranked in the top 10% on the Rock Band 3 leaderboard. I’m just waiting for Sony to get their act together and get online play working for Rock Band 4. For now, I’ll have to settle for crimson stars in brutal mode.

Q: Favorite place to eat in Columbus? That’s hard to say, but probably Huong Vietnamese. They have the best pho and bahn mi outside of the Bay Area.

Q: Best concert you’ve ever been to? My husband’s first big arena show at Banker’s Life Fieldhouse. I didn’t care so much about the music, but it was cool to see his lighting design for the concert.

Q: Favorite quote? “Better to remain silent and be thought a fool than to speak and to remove all doubt.”

Q: Do you have a favorite book or movie? I am a big Star Wars fan in general, but Empire Strikes Back is the best one.

Q: It’s 9 p.m. on a Saturday. What are you doing? Hanging out with the family, playing a game of Settlers of Catan, watching a moving or sitting around the fire pit.